Have you been discriminated against at work? Perhaps a manager or co-worker has discriminated against you. Or, a supervisor has yelled racial epithets at you. Both common sense and your employer’s internal policies dictate that you report this illegal conduct to the Human Resources department immediately. What happens next can have a serious impact on your job and future at the company. It is important to know that how you go about reporting discrimination or harassment in the workplace is critical, and can determine whether you ultimately achieve justice or become a victim.

How to Write a Discrimination Complaint Letter 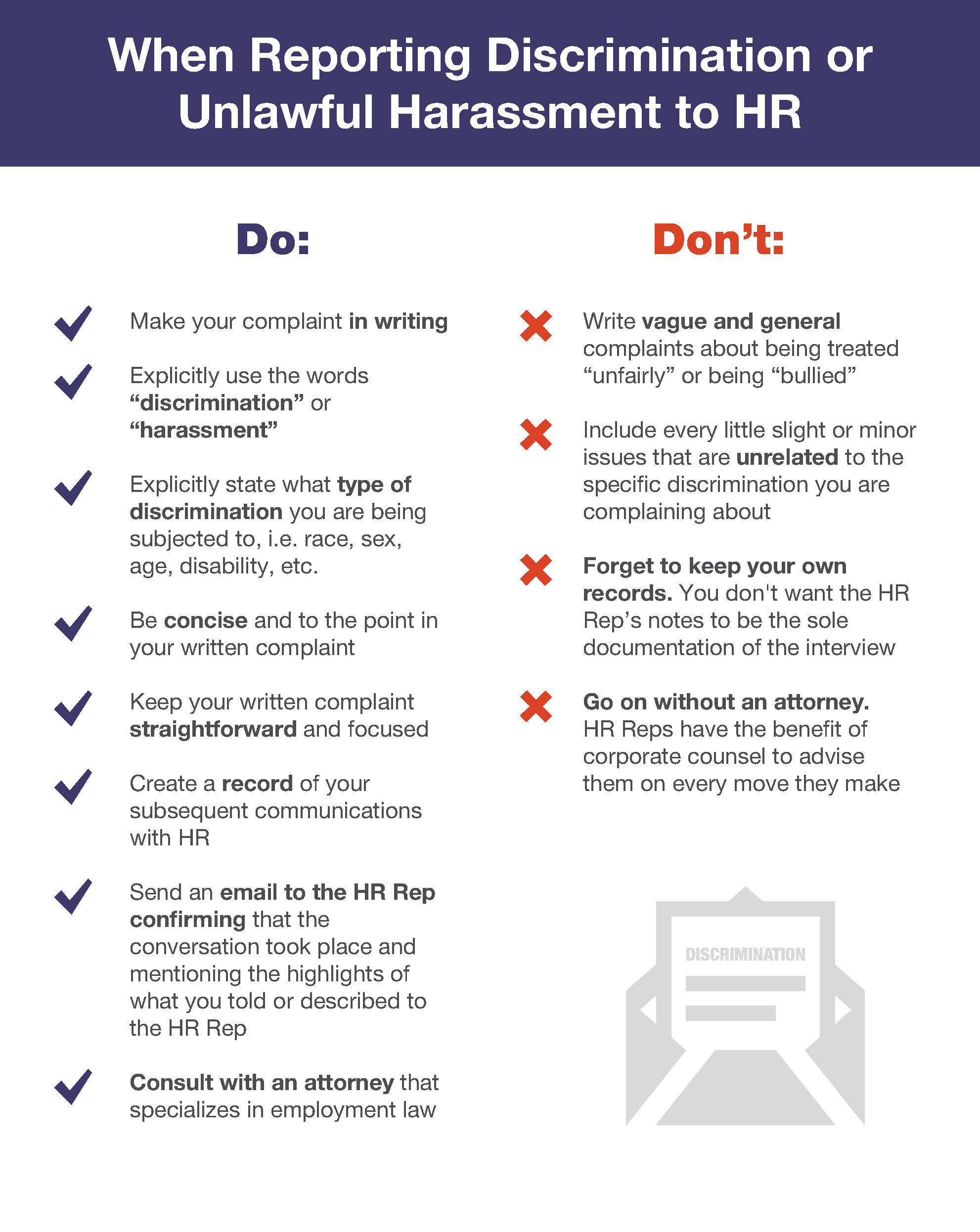 DO report discrimination in writing.

You should have evidence and proof that you in fact complained and reported the discriminatory conduct. The best way to do this is to put it in writing and have some type of confirmation that you submitted it. Employees who merely “call” the HR rep and have a verbal conversation alone are at a great disadvantage. What you reported, and even whether you reported anything at all, can then be in dispute.

Make sure to include the following information in your letter to HR. You’ll want to address the person by name, include the date at the top of the letter, and your name, address, and phone number at the bottom. After the salutation, state the following:

DO explicitly use the words “discrimination” or “unlawful harassment.”

Under the law, in order to be protected from retaliation, you must make clear that you are reporting words or conduct that are in violation of state and federal anti-discrimination laws. As such, your letter needs to specifically state that you are being subjected to “discrimination” or “unlawful harassment” on the basis of your race, sex, age, or other protected status.

Vague and general complaints about being treated “unfairly,” being “bullied”, or being subjected to “micro-aggressions” are NOT sufficient. If you don’t explicitly use the words “discrimination” or “unlawful harassment” in your letter, the company may argue that you did not complain of discrimination, and therefore that you have no protection from being terminated for your complaint.

DO be concise in your written complaint.

Don’t write an overly long or rambling tome that goes off on tangents and vents on every little slight or on minor issues that are unrelated to the specific discrimination you are complaining about. You want to solidify an impression of seriousness and credibility. You do not want to create an appearance of simply being disgruntled or generally dissatisfied with your overall lot in the company. Keep your written complaint straightforward and focused. Keep your tone matter-of-fact. Do NOT resort to dramatics or emotional appeals.

DO keep record of your communications with HR.

DO consult with an attorney who specializes in employment law.

Your company’s HR reps have access to and the benefit of corporate counsel to advise them on every move they make. There is no reason to go it alone when your job environment and security are at stake. For example, you can have a draft of your written complaint of discrimination reviewed by an attorney before you send it. In some cases, it might be best to have the attorney write and make the complaint directly on your behalf. A few minutes of consultation with an attorney can make all the difference in an important, perhaps life-changing, professional decision.

Zatuchni & Associates specializes in discrimination claims across all protected categories. We’ve helped countless clients who have suffered workplace bias secure financial and legal compensation from their employers. If you have been discriminated against or harassed at your workplace, contact our experienced employment attorneys online or call 609-697-2204 today for a free consultation. Our attorneys represent New Jersey employees.